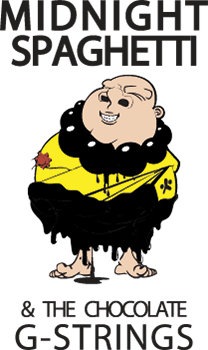 Midnight Spaghetti had a wonderful time at the Fantastic Farm live streaming on Labor Day weekend. Audio and Video from the performance will be available soon. SPAGHETTFEST RADIO SEASON 7 will have it’s 12 Studio episode 9/21/20 and a special broadcast from the MS show 9/26.

Release of The Another World studio album will remain delayed until a safe date to have a normal release concert and tour. The group will be syndicating Spaghettifest Radio and making their music available on a new station that collaborates with artist worldwide to raise funds and awareness for the efforts of a charitable organization called FNE. The Station is called TNBT and launched a week ago. We have been involved with this project for a while, and a 24/7 audio link will be available soon.

Although everyone is facing a “new normal” with social distancing, we are using this time to clean up our archives and add even more interactive options to being a part of our Midnight Spaghetti experience. Recordings, images, videos, and memorabilia are all being archived, and shared over the next few weeks, and we will be giving a facelift to our websites. Hopefully the album will get completed and we will be able to to promise everyone an album release date and future shows. As of now, our April and May dates are canceled. Stay healthy and keep listening to our music. Spaghettifest Radio Season 7 is coming soon.

Tonight , FEB 29, 2020, we celebrate 17 years of funk in Harrisonburg. This has been an awesome voyage so far, and so much more is to come. We had a blast in Mexico a month ago, and are still making strides on the new album. Yes, we keep pushing the release dates, but we want to make sure everything is ready when we announce it’s release and events around it. See you at the show, and here’s to many more years!

Our friend Lightwizard in Australia was commissioned to design the new album’s cover. Steve Willis is an amazing artist who has worked with the group before onMidnight Spaghetti’s 10 yrs of funk poster. A childhood friend of guitarist/songwriter Mickey Glago, Steve was given the premise and concept of the album and captured it perfectly.

Although originally planned to release in the fall, we are working on some extra special items that will come with the new album, along with planning big events to sync with our release. We can’t wait to share the new music with you finally. Until then, we have a show in Williamsburg, Va Nov 1, a Mexico Spaghettifest South trip January 23, and a big party at Bryce Resort Martin Luther King weekend. Might be some other surprise announcements for 2020. Keep the funk alive!

SEASON 5 continues from Spaghetti Studios tonight JULY 1st @ 9pm. Tune in from anywhere and be a part of the fun.  http://spaghettifest.com/spaghettifest-radio/
enter contest and submit your game entries all online @ http://spaghettifest.com/spaghettifest-radio/ or email funk@midnightspaghetti.com or message our social media accounts. MIDNIGHT SPAGHETTI HAS 2 SHOWS IN AUGUST(3 &30) and have been working hard on the album which is def going to drop in 2019. So much more to do, but it is sounding great. Check out our travel tab for more info about the Mexico trip!

Spaghettiquette Album to have a taste: (mp3)

There are no upcoming events at this time.